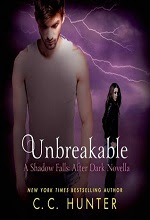 He isn’t everything he says he is. He’s even more…

Who is Chase Tallman, the newest member of Shadow Falls? What made him into the sexy, mysterious vampire he is today? And what led him to Della Tsang?

Step back in time and unearth the secrets that haunt him. The secret of how he became a vampire—and how he knows so much about being reborn. Secrets about his first love, his family–and what steers him toward Della, the beautiful, complicated girl he just can’t seem to stay away from. The one who makes him want things he thought he’d given up on long ago.

It all began with a research study, a palm reader, and a plane crash that sent him on a quest…for a love that’s unbreakable.

– Serie: The Shadow Falls: After Dark 01

– Serie: The Shadow Falls: After Dark 02

All her life, Della’s secret powers have made her feel separated from her human family. Now, she’s where she belongs, at Shadow Falls. With the help of her best friends Kylie and Miranda, she’ll try to prove herself in the paranormal world as an investigator—all the while trying to figure out her own heart. Should she chose Chase, a powerful vampire with whom she shares a special bond? Or Steve, the hot shapeshifter whose kisses make her weak in the knees? When a person with dark connection to her past shows up, it’ll help her decide which guy to choose–and make her question everything she knows about herself. 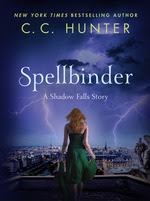 When magic, romance and family secrets collide, the result is spellbinding!

Miranda Kane has always felt like a screw up–at least when it comes to her ability to wield magic. Her only sanctuary is Shadow Falls camp, where she’s learning to harness her powers as a witch. But thanks to her shapeshifter boyfriend who called it quits and ran off to Paris, both her heart and powers feel broken.

When she unexpectedly lands a top spot in a spell casting competition in France, she flies out with her best friends Kylie and Della. But her trip takes her straight into the heart of a dangerous supernatural mystery–and a heated romance. What Miranda doesn’t expect is for her investigation to unleash shocking revelations…about herself, her family, and her arch enemy. Now Miranda must step up and show everyone that she’s a witch to be reckoned with….before it’s too late.

– Serie: The Shadow Falls: After Dark 03

Despite her superhuman strength and enhanced senses, Della Tsang’s life as a vampire certainly hasn’t been easy. Especially since she was reborn and bound to the mysterious, infuriating, and gorgeous Chase Tallman.

But if there’s one thing that’s always kept Della going, it’s her dream of being an elite paranormal investigator. Her newest case is the opportunity she’s been waiting for, but as Della tries to solve the twenty year old murder and clear her father’s name. She uncovers secrets about the vampire council. And about Chase.

Feeling betrayed by all the secrets he’s kept hidden from her, Della is determined to keep him as far away from her heart as she can. But she’ll need his help to solve the case that will lead them into the darkest and ugliest vampire gangs in town and into the scariest reaches of her heart.

Nestled deep in the woods, Shadow Falls is a secret camp where teens with supernatural powers learn to harness their abilities and live in the normal world.

Independent and strong-willed Della Tsang did not believe in vampires…until she became one. Chase Tallman is the newest member of Shadow Falls, but what made him into the sexy, mysterious vampire he is today? And what led him to Della Tsang? And for Miranda Kane, magic has always been something she’s struggled with, but when an opportunity to test her powers takes her to Paris, she’ll have to prove that she’s a witch to be reckoned with and belongs at Shadow Falls.

– Serie: The Shadow Falls: After Dark 04

After captivating millions across the globe, the Shadow Falls saga reaches its final—and most unforgettable—chapter yet! Prepare to fall in love all over again…

Being a dyslexic witch is a curse in itself, but Miranda Kane’s time at Shadow Falls has helped her harness her magical powers. Now, just as she’s finally mastered them and is preparing to graduate with her friends, a near-death experience threatens to ruin it all.

Miranda awakens in the hospital with a mysterious tattoo that no one can explain. As she struggles to make sense of it – and questions her feelings for a certain irresistible shape-shifter and a hot new guy – the strange markings begin to spread all over her body, leaving her desperate to find answers. But before she can solve that problem, a new one arises: her sister is missing.

Has her sister been kidnapped? Miranda will risk her life to find out. Will she live to share the day she’s worked so hard for with her friends? When the clock strikes midnight, will Miranda make it to her graduation at Shadow Falls?